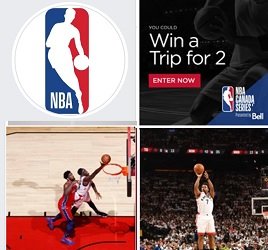 Wrigley’s Juicy Fruit and the NBA Canada (National Basketball Association)  have teamed up for a new contest.

There is one grand prize to be won. The prize consists of a trip for 2 people to the

On June 10th, 2019 one Prize winner will be selected by random draw from among all eligible entries received.

The Juicy Fruit and the NBA Canada Series Contest is open to all legal residents of Canada who have reached the age of 19 at the time of entry,

To enter, visit the promotions page at www.nbacontest.com/draft here and complete the entry form with your name, email address and click submit

There is a limit of one entry per person.

Banana Boat Canada Contest 2022 #bbprotectthefuncontest Photo contest If you and your family are enjoying the outdoors this summer, there

Banana Boat Canada Contest 2022 #bbprotectthefuncontest Photo contest If you and your family are enjoying the outdoors this summer, there

Share your unique beef recipe on Instagram, along with hashtag #TheOneAndOnlyBeefContest to enter for your chance to win $225 ThinkBeef Prize Packs and one Grand Prize valued at over $700!