Yves Veggie Canada 2019 YvesBBQcontest.com Giveaway Thanks to Yves Veggie, vegans and vegetarians can enjoy BBQ season with plant based 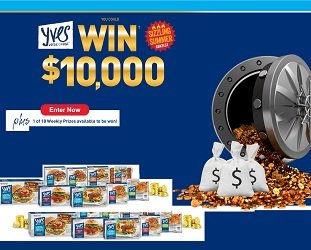 Thanks to Yves Veggie, vegans and vegetarians can enjoy BBQ season with plant based “hot dogs” and meatless patties and burgers.

Even better, Yves Veggie Canada (a Hain-Celestial Brand) is back with their annual Sizzling Summer Yvesbbqcontest.com.

So, what are you waiting for?

Stock up on Yves Veggie products, rev up your barbeque and enter for a chance to win huge prizes from Yves Veggie Cuisine.

There is one Grand Prize to be won, consisting of a $10,000 CDN cash prize

Plus one winner per week (18 in total) will receive a Prepaid Credit Card preloaded with $150 CDN.

There are two parts to this Contest: one Grand Prize Sweepstakes draw from all eligible entries received between May 17, 2019 and September 20, 2019

is open to legal residents of Canada who have reached the age of majority in their Province or Territory.

To enter, visit www.YvesBBQcontest.com here and complete the entry form. Get extra entries for sharing the contest and entering a 12-digit UPC from specially-marked packages of Yves Veggie Cuisine for 5 Bonus Entries. Pin codes (found on Yves Veggie products).

You may enter the contest daily.

You can receive up to five Bonus Entries into the Grand Prize and Weekly Prize
draws when you submit a valid UPC from any Yves Veggie Cuisine product.

This month you may enter the Lays & Canadiens sweepstakes for a chance to win a VIP prize packages, as shown below

Sign up for exclusive contests & sweepstakes delivered daily to your inbox!

We promise not to use your email for spam