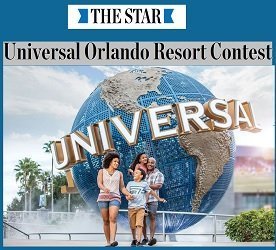 The Toronto Star is Ontario’s top newspaper for keeping in the know about Canadian and local news, as well as business, politics and entertainment. Of course The Star also features sections about food, fashion, health, travel and everyone’s favourite, the comic section.

Another reason to read The Star, or sign up for the newsletter, are the great giveaways, often found on their promotional website, The Wonderlist.

So, if you live in Ontario you may enter the new contest from The Star for a chance to win a trip to a Disney Resort in Orlando.

The Toronto Star Wonderlist.ca Universal Orlando contest is back!

The three grand prizes, each consists of a four day, three night trip for four to Universal Orlando Resort in Orlando, Florida, which includes:

The prize winner will be selected in a random drawing on November 18, 2019, will be notified via email or phone and MUST respond within 48 hours.

The Toronto Star “Universal Orlando Resort Contest – Fall 2019” is open to residents of Ontario, Canada. You must be 18 years of age or older to participate.

This site uses Akismet to reduce spam. Learn how your comment data is processed.

Edo Japan Canada Contests 2020 No Brainer Giveaway at www.edojapan.com Edo Japan is holding a fun new giveaway on their

Edo Japan Canada Contests 2020 No Brainer Giveaway at www.edojapan.com Edo Japan is holding a fun new giveaway on their

Send this to a friend