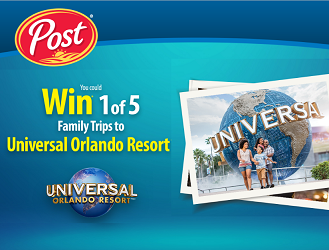 at www.postconsumerbrands.ca/Universal
Post Foods Canada is a cereal brand that loves to incorporate little treats with their cereal boxes.

Always look for promotions that may offer you free swag or the chance to win cool prizes.

One such promotion is live now and it’s an awesome vacation sweepstake for four people!! Enter the

There are five prizes to be won, each consisting of a trip for four people to the Universal Orlando Resor. The prize includes:

There are two ways to enter, with or without making a purchase.

There is no limit of entries per person,

Get into the Holiday spirit with the new promotion from Sobeys Canada.This month Canadians can enter the Holiday Savour Kit giveaway for a chance to win festive reusable shopping bags and Sobeys gift cards, more below