FORD PBR HALL OF FANS SWEEPSTAKES 2019 pbr.com/ford Giveaway The Professional Bull Riders Association (PB) is back with their annual sweepstakes 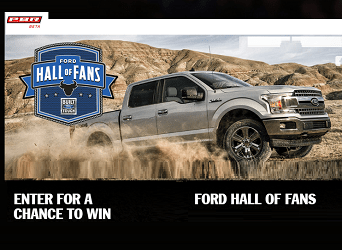 The Professional Bull Riders Association (PB) is back with their annual sweepstakes and is giving one lucky winner the chance to enjoy the Ultimate trip and ride.

Enter via www.pbr.com/ford for your chance to win a new FORD F-150  and a VIP trip to the PBR BFT World Finals in Las Vegas, NV.

The Trip Prize consists of the following:

One winner will be selected in a random drawing on October 28, 2019

The Ford PBR Hall of Fans Sweepstakes contest is open to residents of the United States and District of Columbia (U.S.) who are at least twenty-one years of age or older, with a valid driver’s license.

There are two ways to enter the Sweepstakes

and complete the online form with your contact information.

After entering the Sweepstakes, you may also enter the Ford PBR Hall of Fans Contest

Get more information and enter at https://pbr.com/ford here

if expired, find more like these: win trips & vacations