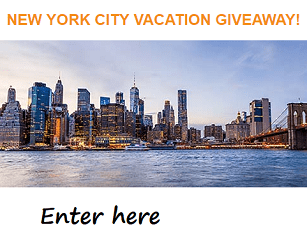 New York City America’s East coast metropolis that never shuts down. From Manhattan’s hustle-bustle, exclusive shopping on Fith Avenue, Broadway entertainment to a little more serenity at it’s sprawling Central Park, there is so much to do and to see.

However, New York, is much more than a city! Make sure to check out the current New York City (and New York State) giveaways and maybe you can grab yourself a piece of the action and visit New York’s most iconic attractions.

< The I LOVE NY Build Your Own Bucket List Sweepstakes, www.iloveny.com >

Enter for a chance to win a trip to New York State’s most popular family-friendly destinations.

New York State Department of Economic Development is giving away ONE Grand Prize.

The Grand Prize will be the winner’s chosen destination from the twenty prize options.

Some examples of available prizes include the following

The #MyNYBucketList Sweepstakes is now ongoing until December 20, 2019.

The prize winner will be selected in a random drawing right after the contest period. will be notified via email or phone and MUST respond to claim the prize.

The I LOVE NY Build Your Own Bucket List Sweepstakes is open to residents of the United States of America. You must be 18 years of age or older to participate.

To participate in the I LOVE NY Build Your Own Bucket List Sweepstakes.

Only one entry per person per day is allowed.

There is one grand prize to be won. The winner will receive a New York City vacation, which includes

Winners will be chosen on or about May 3, 2019, in a random drawing

The contest is open to Canadian and US residents, excluding Quebec who are at least 18 years of age or older,

To enter, visit the online page and complete the entry form

There is a limit of one entry per person/e-mail address/mailing address only.

if expired, find more like these: enter more vacation giveaways

While most of the New York sweepstakes we have shared recently include getaways to the iconic New York City, there is so much more to New York State.
New York State consist of 11 amazing travel regions with attractions for all ages. Enjoy mountains, lakes, rivers, family amusement parks, historic sites and museums. New York State regions include the following:

New York (State) Prizes and getaways you may see here include:

Check the new Swagcodes below and enter to earn points. Stay tuned to this post here, as I will update with new codes daily and every point means you are one step closer to redeeming your next FREE gift card!!