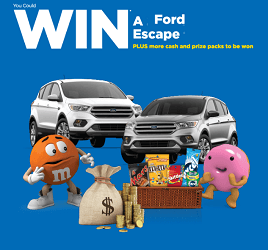 There are two grand prizes to be won. Each Grand Prize consists of a 2019 FORD ESCAPE SE.

There are also 55 secondary prizes to be won, as follows:

and closes on April 24, 2019. The Prize Sweepstakes draw is held at the end of the promotion from all qualified entries.

The WIN A 2019 FORD ESCAPE SE contest is open to legal residents of Ontario, Quebec, British Columbia, Alberta, Saskatchewan, Manitoba or Yukon, who are the age of majority in their province.

You may enter once per day with a valid UPC code.

There is a limit of 63 entries during the Promotion Period