2019 Blue Jays “TD Super Fan Contest at www.mlb.com/bluejays TD Bank and the Toronto Blue Jays have teamed up for 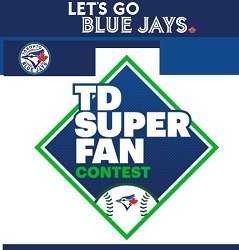 TD Bank and the Toronto Blue Jays have teamed up for a superfan giveaway.

Are you a Blue Jays fan and would love to win the Ultimate Blue Jays experience?

then check out the new contest below

and enter for a chance to win a trip for four to Toronto to throw out the ceremonial first pitch!

Blue Jays & Toronto-Dominion Bank is giving away ONE Grand Prize.

The prize will be selected in a random drawing on September 14, 2019, will be notified via phone and MUST be contacted within 48 hours.

The Blue Jays “TD Super Fan Contest” is open to Canadian residents. You must be 18 years of age or older to participate.

You will receive five additional entries if, subsequent to submission of your Online Entry, you’ll send an email.

Go to www.mlb.com/bluejays to enter

Get into the Holiday spirit with the new promotion from Sobeys Canada.This month Canadians can enter the Holiday Savour Kit giveaway for a chance to win festive reusable shopping bags and Sobeys gift cards, more below