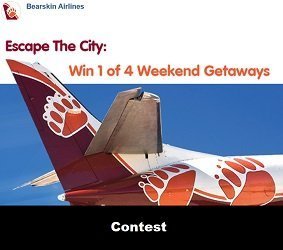 Bearskin Airlines has been servicing passengers in Northern Ontario since 1963.

Today’s flight routes include twelve cities in Ontario, including their main airport in Thunder Bay and Winnipeg, Manitoba.

Bearskin Airlines is giving away ONE Grand Prize – Trip for two to Thunder Bay’s Wake The Giant Music Festival.

The prize value is not specified

The Bearskin Airlines Wake The Giant Contest is now ongoing until September 3, 2019.

The prize winner will be selected in a random drawing on September 3, 2019, will be announced on Bearskin Airlines Facebook Page and MUST respond within 48 hours.

To participate in the Bearskin Airlines Wake The Giant Contest

Go to www.facebook.com/bearskinairlines to enter.

NBA Contest: Game Of The Week: Win Trip to Toronto…

NBA Contest: Game Of The Week: Win Trip to Toronto…